«You will probably never find Café Cherrier on any restaurant list. I can’t recall seeing it recently reviewed by any Montreal restaurant critic or blogger. In the 19 years that I have been on this beat, never once did it occur to me that I should give it a try. Why? Familiarity, I guess, that feeling that the French bistro menu would be boringly predictable. In summer, Café Cherrier is such a scene that you could almost describe it as a terrasse wrapped around a restaurant, and with a great terrasse comes less pressure to offer sharp food. And the final death knell for my interest came from a restaurant-going friend who lives nearby. When I told him I was curious about Café Cherrier’s food, he said: “Tout le monde sait que le Cherrier … c’est pas bon.” Ouf!»

« So true confession: with so much going against the brasserie style of restaurant these days, I didn’t expect much entering Café Cherrier. But how wrong I was! From my first nibble of snails to my last bite of chocolate cake, I was utterly charmed. »

«I was especially taken with the wine list, which isn’t huge but features rare beauties like a natural wine from Philippe Viret in the Côtes du Rhône that will knock your socks off as it’s so crazy beautiful and delicious, as well as a more generic Guigal Côtes du Rhône and a New Zealand Oyster Bay sauvignon. Not only are wine prices fair (most glasses go for under $10), there’s something here for everyone. »

«First off, from the table d’hôte, a casserole of escargots: served in a shallow ramekin, the half-dozen snails were tender, fleshy and doused in a garlic cream enhanced with goat’s cheese. Once we polished off all the snails, we picked up a slice of the excellent baguette and wiped that ramekin clean. »

«After a few slurps of the fish soup, I understood why its odour wafted through this room. With its luxurious texture and a rich fish flavour, this soup must fly out of that kitchen bowl after bowl. I spread the accompanying croutons thickly with the potent rouille, sprinkled over the grated Swiss cheese, and dropped them in one after another until the bowl was empty. Heaven. »

«The rabbit included the saddle and leg, and the tour de force here was that the meat from both parts of the animal were equally tender, a feat as, when overcooked, white rabbit meat is dry and cottony. And the mash of turnip and carrot alongside was simply delicious. Talk about classic French food done right».

«After polishing off our wine and thanking all our nice waiters, we headed out into the night, all in agreement we would return for any occasion, be it a pre-theatre nibble or a special occasion. So the Café Cherrier lives up to its place as one of the city’s best brasseries. I immediately emailed my friend to tell him he was wrong. “Le Cherrier,” I typed, “est bon. Ben bon! »

« Portions are ample and inexpensive, and an easygoing atmosphere prevails. It's popular with musicians, actors, and artists, so contrive to look mysterious or celebrated. »

« While Montreal is a beguiling place in any season, there is no better time to visit this bilingual city than summer. Rue St.-Denis becomes a joyous scene of dueling cafes, as diners temper the humidity with chilled vichyssoise and Chablis. Day lilies, lilacs and peonies brighten the Botanical Garden. The big bands are back to serenade visitors on the balcony of the Chalet du Mont-Royal. And one cultural festival after another makes Montreal night life sizzle with live music, dancing and avant-garde cinema. » [...]

« One of many great deals is Café Cherrier, 3635, rue St.-Denis, (514) 843-4308, an unpretentious bistro just north of the Latin Quarter with outdoor seating. Dinner and lunch are served every day, and an à la carte brunch is served on Saturdays and Sundays. Favorites include Toulouse sausages for $9.50 and steak tartare for $9.85. Dinner for two with wine costs around $40. »

« The tables on the terrace that wraps around this corner building are filled whenever there's even a slim possibility that a heavy sweater and a bowl of café au lait will fend off frostbite. In summer, loyalists stay out until way past midnight, after the kitchen has closed. » 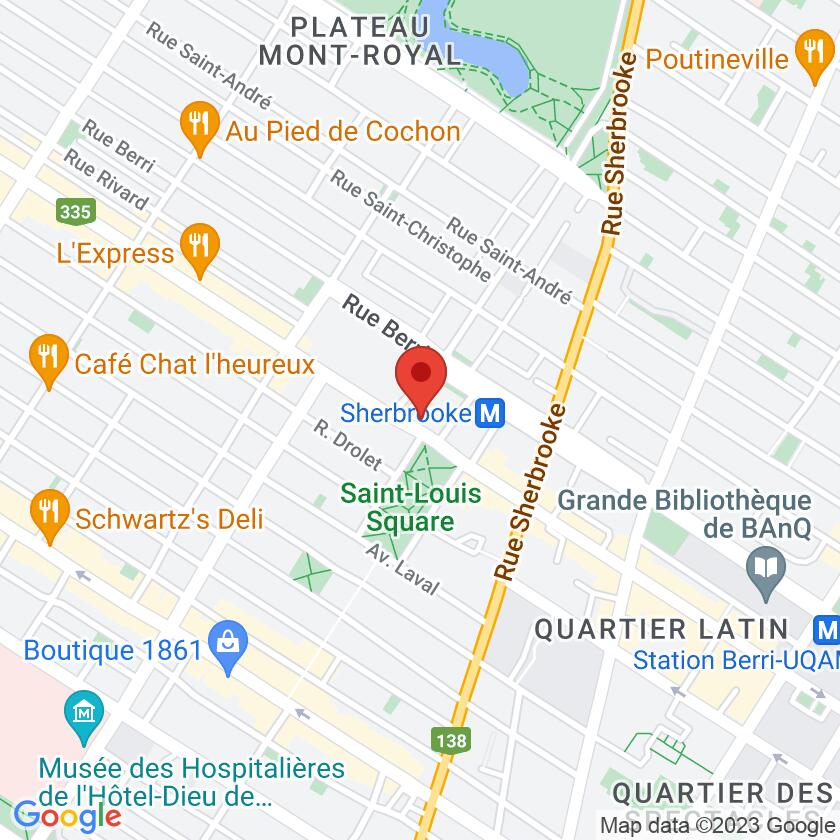